Wild West Junction is proud to sit on the Mother Road, Route 66, and in 2016, the highway celebrated its 90th anniversary. There is much said about Route 66, in story, song, movie, and more, but here is one that shares how Williams, Arizona bid its farewell to the Mother Road.

On a beautiful Fall Saturday, October 13, 1984 – right here in Williams, Arizona – America bid farewell to Route 66. The closing ceremonies took place on the crosses over Grand Canyon Boulevard, the middle exit, on the North side of town.

People from all over the country, even the world, were there to pay their respects to a road that had served the people of the continent since 1926. 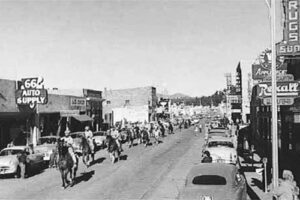 The Major gave a speech as did the dignitaries from around the state of Arizona. Bobby Troup, the man who wrote the song, “Get Your Kicks on Route 66” was there and performed to the delight of everyone present. Even the “Mother Road,” as it is also known, has a past and Bill Williams Mountain Men [in the front of the parade] were there to pay homage to the highway’s roots: The Beale Trail Wagon Road.

And still today, on the East end of Williams, visitors can immerse themselves in all that Route 66 was and ever will be for generations to come.

Mosey on over to Wild West Junction and get a glimpse of life the way it was in the 1860s and 1870s when the Beale Trail stretched from Fort Smith, Arkansas all the way to the Colorado River.

Sit outside or inside and enjoy cowboy “vittles” that are the talk of the town. Live music is heard there most every night.

Other highways came before it. Others stretched farther. Others probably conducted more traffic throughout the country. But no highway gets more recognition or praise than Route 66, America’s first numbered highway, which will turn 90 next year amid a brace of celebrations and the founding of a new organization dedicated to Route 66’s preservation.

That instant recognition of Route 66 as the Mother Road and as the Main Street of America comes in part from its role in popular culture, from Nat King Cole’s song of the same name to John Steinbeck’s description of it in The Grapes of Wrath to the allusion to it in the 2006 Disney/Pixar film Cars. But the true legacy of the road was essentially baked into its conception and early promotion, thanks in large part to Tulsa-based businessman Cyrus Avery.

Want to Reserve a Room at Drover’s Inn?

Want to book a group or event at WWJ?